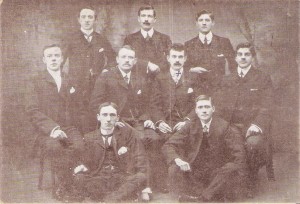 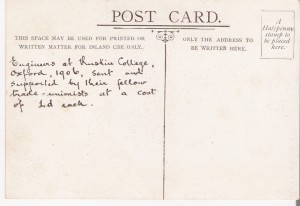 Back of the postcard of the 1906 Engineers

The custom was for photographs to be taken of students organised on the basis of their union. In the early years funding was primarily provided by unions.

The photograph is in the form of a postcard. It pictures a group of engineers who were Ruskin students in 1906 (as stated on the reverse) and were presumably members of the Amalgamated Society of Engineers (ASE). This is perhaps one of the earliest photos of a group of Ruskin students, predating as it does, the move of the college to the Walton Street building. The postcard was won on eBay by Paul Martin for a couple of pounds.

One thought on “Engineer students at Ruskin 1906”