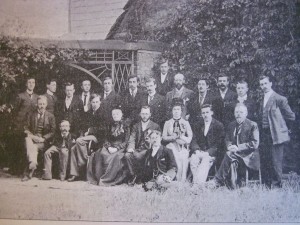 This is a picture of the first annual reunion of the RHFL in May 1901, published in Young Oxford in August 1901. Although I know the names of all RHFL members, I do not know what most of them look like. Teddy Traynor is second from left in the back row, and Fred Burgess third from left. The front row includes several staff members (staff working in Oxford were also eligible to be members). My grandfather Fred Cutcliffe, who worked as sub-editor on Young Oxford, is second from left on the front row (he is in a wheelchair because of childhood polio), sitting between Alfred Hacking, first on the left, and H B Lees-Smith, third from left.