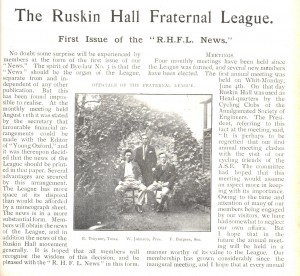 The Ruskin Hall Fraternal League was founded in March 1900 as way for ex-students to keep in touch with each other. This is a picture of the first page of its first newsletter which was published in the college magazine, Young Oxford, in October 1900. The picture is of the Treasurer Teddy Traynor, President Walter Johnson, and Secretary Fred Burgess. The League had many formalities, such as office holders and by-laws. But the main purpose of its monthly meeting was the reading out of letters from former students, and these tended to be both gossipy and political (though generally only short excerpts are given in the RHFL News). Several students went back to stand in municipal elections, or work for their unions or with their political parties (mostly ILP, but some SDF and at least one Fabian). Some were later associated with the Plebs League, including Traynor and Burgess. i have added (/am adding) brief biographies of some of the students to the database, using the RHFL News and other sources. I am tagging them ‘Ruskin Hall’.