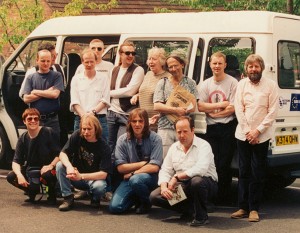 Visits were a feature of Ruskin History courses from at least the 1990s. This particular trip took place in the Summer term of 1994 at the end of the year in which one year ( as opposed to two year) courses were introduced into the college.

This visit was to the industrial outdoor museum at Ironbridge. Other visits would include Avebury, the former cinema museum at the BFI, Burford, Chartist villages,Upper Heyford Cold War base,Imperial War Museum.