Date and place of birth: 1875 at 51 Froome, Mordiford, Herefordshire  (Christened, 12 September 1875 according to baptismal record)

Work: Various posts from 1898 with the Midland Railway Company.

Amalgamated Society of Railway Servants, 1898-1905 member of ASRS Toton No.1 branch, Nottinghamshire; 1905-1912 member of ASRS Clay Cross branch, Derbyshire – October 1905 Watkins attended the Annual General Meeting of the Amalgamated Society of Railway Servants held at Montgomery Hall, Surrey Street, Sheffield as a delegate of ASRS Toton No.1 branch (covering the railway yards of Nottingham and Long Eaton) where he worked as a Signalman.

Under item APPLICATION (67) RUSKIN COLLEGE, OXFORD: “Congress having decided to receive a representative from this institution on the Thursday morning, Mr Wm. Young [a Ruskin student sponsored by the Amalgamated Society of Engineers] attended and addressed the delegates, giving an outline of what the College was doing towards the education of the workers, after which he was accorded a vote of thanks and the following resolution was then unanimously adopted: –

118. “That this Congress decides to grant the sum of £300 toward the Building Fund of Ruskin College, and trust that our Society will encourage the Institution in every way possible.  We further decide to take up two scholarships, and instruct the E. C. to make the necessary arrangements to give effect to this resolution.”

In December 1905 the ASRS Executive Committee opened applications for 2 scholarships for members under 35 and invited a short 200-word statement of “your work in the Trade Union and Labour movements”.

In June 1906 the ASRS Executive proposed sponsoring four students for a 12-month course commencing in 1907, to be selected by Ruskin College Principal, Dennis Hird M.A. from essays submitted by the applicants.

In October 1906 the ASRS AGM in Cardiff duly approved the proposal.

Dates at Ruskin: 1907
Source of funding: In December 1906 the Amalgamated Society of Railway Servants Executive Committee agreed to sponsor George G.W. “Smiler” Brown (a railway fireman from Hull for the North East Railway), Charles Watkins (a Midland Railway signalman now transferred to Clay Cross), A.J. Williams (a GWR passenger guard from Carmarthen and son of ASRS assistant general secretary, Mr J.E. Williams) and G. (Geoff) Richards (a train driver from Aberdare for the Taff Vale Railway) on a 12-month residential course at Ruskin.
Campaigns/political activity:
During 1907 Watkins was a student at Ruskin College, Oxford at a time when the trade union movement was beginning under the impetus of Keir Hardie’s Trades Dispute Act (1906) to recover from a period of comparative quietude that followed the Taff Vale judgement (1901).  A struggle for control over the teaching and influence of Ruskin College intensified with Oxford University authorities, the Christian socialist-influenced Workers’ Education Association and Liberal politicians such as Ruskin College Vice-Principal, Charles Sidney Buxton on one side, wishing to forestall class conflict, while radicals around Ruskin College Principal, Dennis Hird heralded the emergence of ‘independent working class education’. Charles Watkins wrote to the Railway Review on 7 May 1909 about the Ruskin dispute:

“The first awkward sign of this hostility [from the College and Oxford University authorities towards Ruskin Principal, Dennis Hird] was shown in 1907- the year I was in residence – when an attempt was made to have Mr Hird’s subjects – sociology and logic – removed from the curriculum”.

In 1907 Watkins signed the petition at Ruskin College:

“We, the undersigned, should strongly object to the removal of Evolution, Sociology, Logic from the Curriculum of Ruskin College. Signed by W.M.  Watson, Geoff Richards, Jonn Evans, John Evans,  Alf W. Monks, C. Watkins and G.W. Browne.”
Watkins was an early supporter of Ruskin Principal, Dennis Hird’s determination for Ruskin College to become a labour movement institution and an early strong supporter of the Ruskin Students’ strike in 1909 when through the letters column of the weekly Railway Review and via resolutions from his Clay Cross ASRS branch and Chesterfield ASRS District Council to the union’s Executive Committee he argued the strikers’ case against Albert Mansfield of the Workers’ Educational Association and supporters of the Ruskin Executive Committee’s decision to suspend and then dismiss Dennis Hird. Watkins moved the successful resolution at the ASRS AGM in 1910 calling for the ASRS to sever links with Ruskin College and instead to sponsor the Central Labour College with Dennis Hird as its Principal.

Watkins took a leading role as a founder of the Plebs’ League, chairing Conferences in Oxford called by Plebs to establish the Central Labour College in August 1909 and again in 1910. Watkins continued to be a contributor to Plebs Magazine on a variety of subjects (Political economy, Industrial history and Philosophy) until 1916.

1911 census records Charles Watkins living as a boarder at Hepthorne Lane, North Wingfield, (Clay Cross), Near Chesterfield, Derbyshire. Occupation Signalman Railway. “Fir Vale” the address given in his correspondence is likely to have been a one of a row of railway cottages (since demolished) adjacent to the Stationmaster’s house in Hepthorne Lane, opposite site of former Clay Cross signalbox.

During 1911 Charles Watkins moved to Sheffield (address unknown) as a Signalman transferring his Amalgamated Society of Railway Servants membership to (ASRS) Sheffield No.1 branch.

Politics/trade union activity:
On the August bank holiday 1909, now back working as a Signalman at Clay Cross, Watkins attended the first conference arranged by the Plebs League at Taphouse’s Music Room, Magdelene Street, Oxford to establish a Labour College.  Watkins chaired the afternoon session of the Plebs League Conference, predicting that just as the Taff Vale judgement had won workers their political independence (through the foundation of the Labour Representation Committee), the Ruskin strike would do the same for their educational independence.

Worked with Tom Mann’s Industrial Syndicalist Education League (ISEL) editing issue 11 of the ISEL monthly paper, The Syndicalist published in May 1911. Watkins contributed a polemic against Lloyd George’s industrial relations policy: ‘Conciliation or Emancipation, Which?’ republished by the ISEL for a number of years as a pamphlet setting out Syndicalist aims and methods for railworkers.

Following the first national railworkers’ strike from 15-19 August 1911, Watkins edited and published a monthly newspaper, ‘The Syndicalist Railwayman’ in 4 editions from September to December 1911.

Took part in the founding of the ‘League of the Plebs’ (Plebs League) by chairing the first Plebs Conference.  Contributed numerous articles to the Plebs Magazine until 1916.

From 1913 a member of ASRS Sheffield No.1 branch and from February 1913 a founder member of National Union of Railwaymen (NUR) Sheffield & District branch.

7-11 October, 1912, Watkins attends the ASRS AGM, held in the Oak Room of the Mansion House, Dublin and moved resolution 31 attacking ‘Conciliation and Arbitration’ and resolution 52 on ‘Socialism’.

From 10-14 February, 1913 Watkins was a delegate of Clay Cross ASRS branch to the ASRS Special General Meeting (the ‘Fusion Congress’) held at Holborn Hall, Grays Inn Road, London called to discuss the proposed fusion between ASRS, the General Railway Workers’ Union and the United Signalmen’s & Pointsmen’s Society to form the National Union of Railwaymen (NUR).

Watkins was elected to the Standing Orders Committee at the Fusion Congress where he moved the key motion, committing the new union to industrial unionism by resolving it should take into membership:

“any workers employed on or in connection with any railway in the United Kingdom”.

This issue settled the major political and organisational controversy of Congress. A month earlier the Labour Party-supporting Daily Citizen newspaper carried an interview with ASRS assistant general secretary, J. H. Thomas, MP, in which he erroneously and (as he later admitted) without the authority of the union Executive told the Daily Citizen that skilled craftsmen would not be admitted to the new merged union – undermining efforts of union negotiators to bring together skilled and unskilled railworkers in one organisation. His interview nearly derailed the merger (as he intended) and led to a confrontation at the Fusion Conference when Tom Lowth, general secretary of the GRWU demanded the ASRS repudiate the statements made by its assistant general secretary, J.H. Thomas, M.P. That repudition was accomplished in a resolution moved by Watkins in a decisive Congress vote ensuring the new union, NUR would become Britain’s first industrial union.

From 15-19 June 1914, Watkins was a delegate from Sheffield No.1 branch to the first NUR AGM held in Swansea. He was elected to the Standing Orders Committee and moved the resolution on state ownership of railways, which was carried unanimously.

Four monthly editions of The Syndicalist Railwayman, a monthly newspaper, which he edited and published from September-December 1911 through Tom Mann’s ISEL in the aftermath of Britain’s first national railworkers’ strike in August 1911. These give a vivid contemporary account of the analysis and aspirations of militant industrial trade unionists in the railway industry.

‘Conciliation or Emancipation, Which?’ originally published in May 1911 issue of Tom Mann’s monthly newspaper, The Syndicalist, subsequently republished as a pamphlet.

Various articles published in Plebs Magazine between 1910 and 1916.

The text of Watkins’ polemic ‘Conciliation or Emancipation, Which?’ has been reproduced as a suffix to ‘The Industrial Syndicalist’, Documents in Socialist History No.3, Spokesman Books (1974). 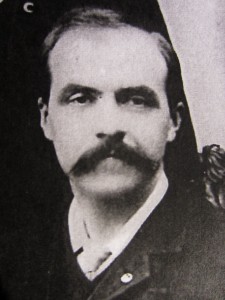 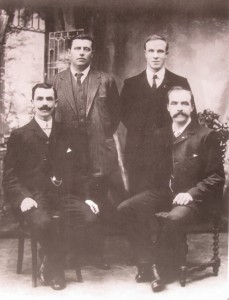 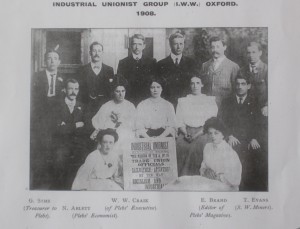 *Why it is called the ‘Red Scare’ is interesting. I’m sure that the original photograph was posed in order to promote a political organisation (though the poster in the photograph would indicate that the organisation is the Advocates of Industrial Unionism established by the Socialist Labour Party following its Edinburgh Conference in April 1906, rather than the Industrial Workers of Great Britain, the ‘De Leonist’ rump of the SLP went on to form in 1909). All the participants in the photograph are groomed and well-dressed, formally arranged around the newspaper/poster which reads: “The INDUSTRIAL UNIONIST – date illegible – THE MISSION OF THE A. of I.U. – TRADE UNION OFFICIALS – RAILWAYMEN, ATTENTION ! – BY THE WAY – SOCIALISM AND INDUSTRIAL…”

The poster and the presence of George Sims, Charles Watkins, Noah Ablett, Tom Evans (class of 1907) and William Craik (who arrived at Ruskin in 1908) indicate that 1908 is the probable date of the photograph. That is to say the photograph was taken before the Ruskin strike and the events that precipitated it (the suspension and subsequent sacking of Hird).

However the photograph in the context in which I have seen it (and in which it is reproduced in the  image here ) is being used to attack the Ruskin strikers as a ‘militant tendency’. It was reproduced in a short pamphlet smearing Hird and the strikers and exculpating the College authorities, by the so-called “Students In Residence” – in reality a front for the Ruskin College authorities – as a means of discrediting the extremely successful appeal to the trade unions by the Ruskin strikers (the Plebs League and its supporters) to withdraw financial and institutional support for the College and to establish a new ‘Labour Movement College’.

The students in residence were mainly the non-trade union sponsored students at the College. The aim of their pamphlet was to persuade the leaders of the sponsoring trade unions (most of whom required little persuasion) that the Ruskin strikers were social revolutionaries whose aims and objectives were antithetical to the respectable trade union movement.

Hence, the photograph is captioned to emphasise the connection between the I.W.W. (the epitome of red scare bogeymen before Bolshevism replaced it after October 1917) and the named individuals in the Plebs League (all of whom are prominent in calling for the trade unions to break their link with Ruskin and establish the Central Labour College).

So, while the photograph may have had quite different purpose when it was originally taken I believe that it is reproduced in this format as a ‘Red Scare’.