Date and place of birth: 22 July 1936. Easington Colliery, County Durham.
Family: My father was a miner at the local pit. My mother also came from a mining family. Their names were Joseph (Joe) and Betsy (Betty) Barnes. I was an only child.
Work: Railway Clerk.
Politics/Trade union activity: Secretary of both the Easington Colliery Branch of the Labour Party and the Peterlee and District Fabian Society prior to attending Ruskin. Branch Delegate to a Line Conference of the Transport and Salaried Staff’s Association. (TSSA)

Dates at Ruskin: October 1960 to June 1962.
Source of funding: LEA grant from Durham County Council
Campaigns/political activity: Member of the Oxford Committee of 100. (see my account of my life at Ruskin in http://threescoreyearsandten.blogspot.co.uk/2010/10/people-like-me.html
Subjects studied at Ruskin: Economics and Politics.
Dissertation:
Qualification: Diploma in Economics and Political Science.

Education: Hull University 1962-5. B.A. in Philosophy and Political Studies (2.1.)Work Lecturer, North Notts College of Further Education 1965-66. Lecturer, Sheffield University Extramural Department/Division of Continuing Education 1966-87, mainly teaching trade unionists on day release courses. Member of Parliament for N.E. Derbyshire 1987 to 2005.
Politics/trade union activity: Held a variety of positions in the North East Derbyshire Constituency Labour Party from 1970 to 1987 and then became their MP from 1987 to 2005. I am currently Political Education Officer for their Dronfield Branch. Was active in my ASTMS/MSF Branches at University, then in the Commons.
Family Married Ann Stephenson (a miners’ daughter from a neighbouring colliery) in 1963. Children – Stephen and Joanne. Grandchildren – Joseph and Amy.
Place & date of death:

Since 1969 my wife and I have lived in Dronfield in Derbyshire.

I have had a variety of articles published in Tribune, the Morning Star, the Guardian (with Ken Livingstone), Labour Weekly, Local Socialism, London Labour Briefing, the Derbyshire Miner, Post-16 Educator, the Sheffield Star, the Chesterfield May Day Brochure, the Eckington Leader, the Dronfield Advertiser, the Chesterfield Advertiser and in other publications. Between October 1975 and August 1983, I had 50 articles published in Labour Leader (Independent Labour Publications). In my period as an MP from 1987 and 2005 copies of my articles were often circulated in 121 reports which I issued at Constituency Labour Party meetings. It is my intention to eventually deposit copies of these with the Derbyshire County Council Archives. My contributions in the Commons can be found via the parliamentary indexes between 1987 and 2005 and via other parliamentary sources, including Committee Reports. Since 2006 I have run a blog which up to 11th June 2013 contained 690 items. See – http://threescoreyearsandten.blogspot.co.uk/ . Since January 2009, I have also contributed some 150 items here – http://dronfieldblather.blogspot.co.uk/ 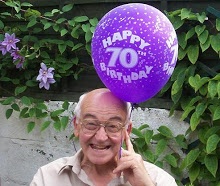