Trade Union membership (at time of entry to Ruskin)

Established the Milk Marketing Board ‘which more than any other initiative was responsible for bringing the agriculture of the lowlands of Wales (and the whole of the United Kingdom for that matter) out of poverty from 1933 onwards.’ (Oxford DNB)

List of publications in Journal of Agricultural Economics (vol. 12, 1956). 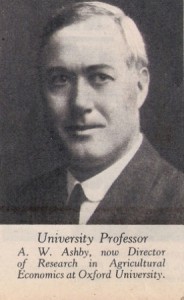 I only came across Ashby’s name in the Picture Post article forwarded to the website. I was astonished that the son of the famous Joseph Ashby could be apparently accepted into institutions like the civil service and Oxford University during a period in which social mobility was supposedly so difficult. His sister, Mabel Ashby became a principal of Hillcroft College.